FoCL Board Game Jam: The Expansion

Taking Board Game Jam design skills to the next level.

Building on previous jams, in this day long workshop students investigated prototyping, play testing, and how to add variety and fun by employing, and refining, different game mechanics. A variety of games were played followed by reflection on the mechanics involved, how the theme and setting affected engagement, age appropriate mechanics and themes, and the ways that different players may choose to engage and interact with a game.

Students reviewed games created from previous jams, and then selected one game to expand and improve upon. During the day students also discussed the differences between copyright and licensing, how to identify licensed material that is free for re-use, how to licence their own work, and how the licensing of their own game could benefit others.

No games design experience or previous attendance was required.

The chosen game for expansion was Animal Election created by El, Eli, Gav, Lesley at a student and staff half day workshop held in 2016.

A card game in which it’s election season between three candidates for the rule of the animal kingdom. Zebra, Llama, and Donkey. Players win the game by getting the most votes through rolling dice and collecting cards of a particular animal type.

Licence: Except where otherwise stated, this work is licensed under CC BY 4.0

The PDF of Animal Elections includes pictures of card designs. Click through to the Flickr album via the slideshow below for higher resolution copies of those images and more. 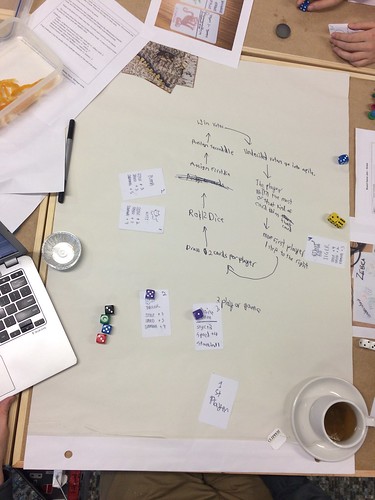 Except where otherwise stated, these works by staff and students of the The University of Edinburgh are licensed under a Creative Commons Attribution licence 4.0